This scheme seems perfectly plausible and suggests how palomino breeders might increase their chances of producing the “ideal” golden palomino. Gower also suggests that AAAA horses may be redder than AAAa horses and a better choice for producing golden palominos.

flaxen and other affects

Chestnut horses may have a light mane and tail, and sometimes light lower legs too. This attractive combination is known as flaxen and is highly prized among some breeds, such as the Suffolk Punch, Jutland and Haflinger. The actual colour of the mane and tail may be honey, flaxen, ivory, or white. Sometimes there are black hairs among the light (which may be called gray). 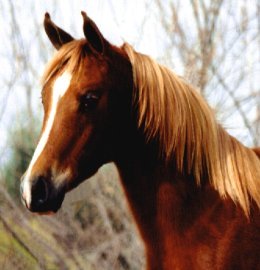 The flaxen (F) gene is usually reported to have two known alleles. F+, the wildtype allele is supposedly dominant over Ff, which when homozygous causes a flaxen (i.e. light colored) mane and tail in chestnut horses. Black pigment isn’t affected and so black, bay and brown horses don’t show flaxen manes and tails, although they may have the FfFf genotype. However there are cases of people breeding flaxen horses together and getting non flaxen foals, so the inheritance of flaxen can't be as simple as involving just one gene with a recessive flaxen allele.

Flaxen might be caused by 2 (or more) seperate genes, both of which need to operate to produce colour in the mane and tail. The recessive alleles make proteins which don't work properly, the dominant alleles make proteins that do work. In the presence of a dominant allele at both genes colour pigment is made. If one or both of the genes are homozygous recessive for the recessive alleles then no pigment is made.

If this were true then a flaxen foal could be born to non flaxen chestnuts (like with any other recessive gene). But unlike in cases where one recessive gene is involved it would be possible for 2 flaxen parents to have a non flaxen foal (as observed with the Arabs). In breeds where flaxen is the norm it is possible that the recessive alleles have become fixed at both genes (i.e. only the recessive exist for those horses). Possibly the genes also have a more subtle effect on coat colour too.

I should point out that this isn't the only possible explanation for flaxen, but it is one which could be tested if enough data were gotten together. Another possibility is that the genotype is only partially penetrant (i.e. it only shows when certain other conditions are met, possibly including environment or the background genotype). There are doubtless other possiblities too. 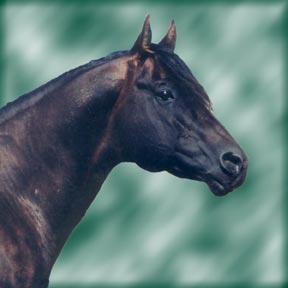 According to Gower (1999) the flaxen genotype sometimes causes bay Arabs to have “silver” streaked tails (“silver-tails”), something I've also seen in a Welsh pony (some Welsh ponies have some Arab ancestry). Such silver streaks may be due a flaxen genotype in these cases, or it may be that another gene or genes (as yet unidentified) are responsible. As alluded to above the flaxen genotype has not yet been completely characterised.

One gene, the Taffy locus (labelled Z) is known to act on black pigment to cause silvering of the mane and tails of black and bay horses. It is commonly known as the Silver Dapple, but it isn’t in fact always associated with dappling. The gene has no affect on red pigment (or at least only a subtle one). It’s possible that silver-tail is a variation of this.

I’ve also heard of a silver-tail bay being produced out of a “heavily roaned” chestnut mare with a skunk or coon tail (sometimes also called “brush tail”). Coon tail is a type of ticking that most commonly occurs in Arabs and Thoroughbreds, and is possibly controlled by variant alleles of the roan gene (Rn). Ticking may or may not be present on the body but coon-tail ticking is always associated with horizontal white bands at the top of the tail. Perhaps silver tail is related in some way coon tail. It would be interesting to know if silver-tails ever show any other evidence of ticking, perhaps as they mature. I certainly found one example on the web of a bay Arab/Warmblood mare with what looks like a silver-tail, and with some ticking around the flanks and belly, (http://www.cyberhorse.com.au/cgi-bin/dcforum/dcboard.cgi?forum=equestrian&mark=25116&az=previous_topic&archive=yes, accessed on 19/10/2005). 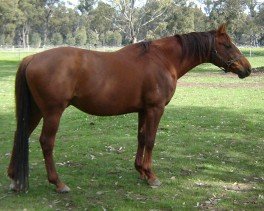 Chestnuts horses may sometimes look dark due to a admixture of black or liver chestnut hairs throughout the coat, including in the mane and tail. This is due to the action of the sooty (Sty) gene. “Sooty” marks may appear as dapples, which can vary with the time of year. Sooty chestnuts may sometimes be mistaken for liver chestnuts, although the underlying color can actually be any of the shades of chestnut. The Sty gene has two known alleles: Sty+ is the wildtype allele and is dominant over StyS, which causes a sooty phenotype when homozygous. One suspects that flaxen chestnuts with a “gray” mane and tail may have the sooty genotype in addition to a flaxen genotype.