You can read more about the inheritance of the gene in gray horses on the essential horse genetics page.

The grey allele is a mutation of a gene on horse chromosome 25, which was identified by a research team at Uppsala University in Sweden (Rosengren Pielberg et al, 2008). They found that all of the grey horses (and only grey horses) had a 4600 base pair duplication (i.e. repeat) in a non-coding region (an intron) of one particular gene. The mutation occurred in grey horses from 14 diverse breeds, including Arabs, Thoroughbreds and several pony breeds, indicating a common ancestral gene, possibly tracing to an Arab founder.

The duplication causes an overproduction of proteins from two nearby genes (in genetics terminology an upregulation of the genes). The researchers think that the grey mutation stimulates the growth of pigment cells, leading to a premature loss of the stem cells needed for hair pigmentation. 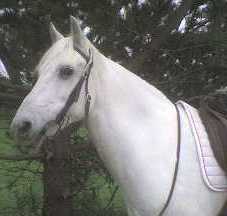 Unfortunately, grey is associated with an increased risk of developing melanomas. It is thought that about 75% of grey horses older than 15 years develop a benign form of melanoma that can become malignant. The researchers found that homozygous grey horses greyed faster and had a much higher incidence of melanoma.

In some heterozygous horses the mutant gene was deactivated in some regions of their body, so normal pigment production has been able to resume, giving the marks known as "blood marks". Flea-bitten grey horses develop speckles in the original coat colour, after the greying process has started. This might be due to the same mechanism as blood marking, or "flea-bites" may be controlled by a separate gene, as discussed below.

The grey mutation provides a good example of the regulatory power of mutations as an underlying mechanism for phenotypic diversity. No gene products are actually altered. The mutations affect the expression of neighbouring genes - so that they are not properly regulated. Regulatory mutations can and do cause genes to be over-expressed (as here), under-expressed, or expressed at different times and/or in places. Such mutations can have profound affects on phenotype, causing differences both within and between species. 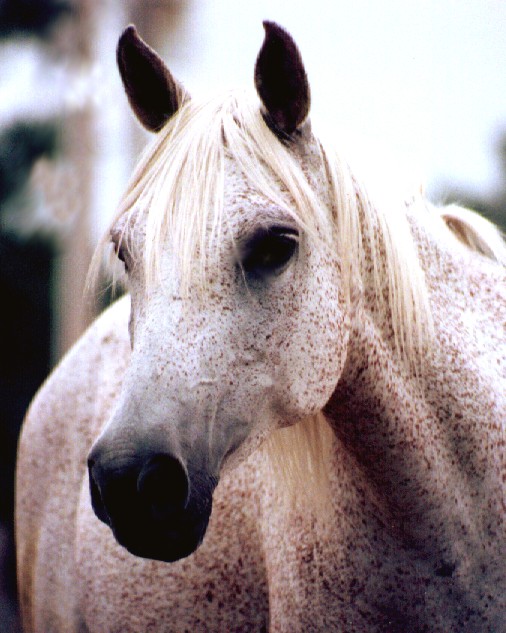 Flea-bitten gray horses develop speckles in the original coat color. For example gray horses born chestnut develop chestnut "flea-bites". If this speckling starts soon enough the flea-bites can become quite large and numerous, with the horse developing to look a bit like a leopard spot appaloosa.

"Flea-bites" are thought to be controlled by a separate and probably recessive gene, not linked to the gray gene. It is possible that other colors of horse can have the flea-bitten genotype, but the speckles wouldn't show since they are the same color as the coat!