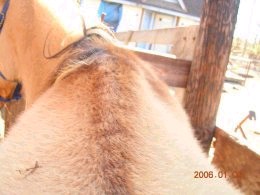 In addition to having a light coat dun horses have some or all of a number of primitive or zebra markings. This may be because of pleiotropy, with the dilution allele having more than one affect on the phenotype. However occasionally these markings occur in non dun horses, such as bays and chestnuts. This indicates the possibility of there being a separate gene or genes, with at least one being tightly linked to the dun gene. It might also be that the dun allele has pleiotropic affects and there is another gene affecting primitive markings, perhaps with the allele for markings only existing in a few lines.

The primitive markings of dun horses are the face mask and/or cob-webbing, ear tips and edging, the dorsal stripe, leg barring (zebra stripes), neck and shoulder stripes or shadowing, mottling, and mane and tail guard hairs. They vary in color according to the base color of the horse and, except in the case of guard hairs, will match the mane color, for example being black on a yellow dun and red or brown on a red dun.

A darker mask is always present on the faces of dun horses, but varies considerably between horses in the extent of its coverage and the amount contrast between the mask and the rest of the head. The mask will be on the bridge of the nose and usually around the eyes, sometimes extending down to the jaw and muzzle or occurring as outlines to the lips and nostrils. Sometimes the whole head is dark and the mask can even extend further to cover the neck. White facial markings can obscure or accentuate the mask, depending on the extent of markings in comparison to the mask. Cob-webbing may occur on the face, in the form of fine darker lines extending from under the forelock over the forehead. Darker color may occur at the tips of the ears and encircling the ears, and occasionally covering a larger portion of the ear (up to about three-quarters of it).

The dorsal stripe (also descriptively known as a lineback) runs along the backbone of dun horses, from the withers to the base of the tail. It may occasionally be broken.

Dark stripes may occur transversally across the withers or neck, possibly extending into the hollow of the shoulder. Where there are several lines are close together a larger area of dark may occur, called shadowing.

Leg barring consists of horizontal stripes on the legs, which are also descriptively known as zebra stripes. The color of the stripes vary according to the base color of the horse and will be the same as the dorsal stripe. Stripes may occur across the backs of the hocks and knees, and less often across the front of the forearms and/or stifle. Rarely more extensive striping occurs, with stripes, barbs and ghost markings higher up the body.

Small dark circles of may occur, especially in the summer coat and especially around the shoulders, forearms, gaskins and stifles of dun horses. These are not the same as dapples seen on some other horses.

Guard hairs are short coarse white hairs that occur across the top of the tail and each side of the mane. Sometimes they only occur with the winter coat. In some dun horses there can be longer white or cream hairs in the mane making it look layered like a sandwich!

It is possible that another variant of the dun allele exists in some of the primitive breeds such as the Norwegian Fjord horses, the Konik and the Sorraia, and possibly existed in the Tarpan and Przewalski’s horses. Alternatively it might just be that the DD allele is acting with the wild-type agouti genotype A+A+, giving a lighter coloring than would be seen with the other possible genotypes that occur in other breeds.

The Norwegian Fjord horse is a primitive breed of horses that now has only dun horses, although the dun may be due to another variant of the dun allele.